To know a truth well, one must have fought it out

The goal of the Website is to provide clinicians useful, evidence-based information regarding sepsis and its management. We will not perpetuate the mistruths and unscientific information generated by the Early Goal Directed study [1]and propagated by the Surviving Sepsis Campaign [2-5]and other affiliated organizations. This website will be devoid of commercial, financial and other conflicts of interest.

Our goal is to:

Inform, generate Inquiry with open discussion and to do this with Integrity and honesty.

Sepsis is a life-threatening condition that arises when the body's response to infection causes injury to its own tissues and organs.Sepsis is best described as infection complicated by organ dysfunction.Sepsis is caused by an immune response triggered by an infection.

The most common cause of sepsis is pneumonia, followed by abdominal/pelvic infections and “uro-sepsis.” Most commonly, the infection is caused by a bacteria, sometimes a fungus and rarely a virus.

The word “sepsis” is derived from the ancient Greek word for rotten flesh and putrefaction. Since then, a wide variety of definitions have been applied to sepsis, including sepsis syndrome, severe sepsis, bacteremia, septicemia and, septic shock. In 1991, the American College of Chest Physicians (ACCP) and the Society of Critical Care Medicine (SCCM) developed a new set of terms and definitions to define sepsis in a more “precise manner.”[8] These definitions took into account the findings that sepsis may result from a multitude of infectious agents and microbial mediators and may not be associated with detectable bloodstream infection. The term “systemic inflammatory response syndrome” (SIRS) was coined to describe the common systemic response to a wide variety of insults. Four SIRS criteria were defined, namely:

Patients who met two or more of these criteria fulfilled the definition of SIRS.  When SIRS was the result of a suspected or confirmed infectious process, patients were defined as having “sepsis”. Severe sepsis was defined as sepsis plus organ dysfunction. Septic shock was a subset of severe sepsis and was defined as “sepsis-induced hypotension persisting despite adequate fluid resuscitation”.  However, it became evident that the use of the SIRS criteria to define sepsis was problematic, as it lacked both sensitivity and specificity. In order to “improve” on these definitions, updated definitions for sepsis and septic shock were released in 2016 by the Third International Consensus Taskforce (Sepsis-3).[12-14] Sepsis was defined as life-threatening organ dysfunction caused by a dysregulated host response to infection. For clinical operationalization, organ dysfunction was defined as an increase in the Sequential Sepsis Organ Assessment (SOFA) score of 2 or more points for patients in the ICU.  A new bedside score termed quickSOFA (qSOFA) was developed to describe organ dysfunction in non-ICU patients. Patients required at least 2 of the following qSOFA criteria to be diagnosed as having sepsis:

Septic shock was defined as a subset of sepsis with “profound circulatory, cellular and metabolic abnormalities”. Patients with septic shock are identified by the requirement for vasopressors to maintain a mean arterial pressure of 65 mmHg or greater and a serum lactate greater than 2 mmol/L in the “absence of hypovolemia”.  With the new definitions, the “SIRS criteria” are no longer used to screen for or diagnose sepsis and the term “severe sepsis” was removed.

While the qSOFA score may predict mortality with greater accuracy than the SIRS criteria, for the clinician at the bedside it appears that qSOFA and the new SEPS-3 definitions have very little (if any) utility. While not perfect the SIRS construct remains useful for the early identification of sepsis. However, it is important to emphasize that no screening tool or checklist trumps sound clinical judgement.

The precise prevalence of sepsis is difficult to determine. It has been estimated that over 300 million patients develop pneumonia across the globe each year.[7]A conservative estimate suggests that that Global annual burden of sepsis is approximately 20 million cases.[8]The incidence of severe sepsis in the United States is estimated to be about 300 cases per 100,000 population. [9-11]Data from 2004-2009 demonstrates a 13% average annual increase for the incidence of severe sepsis.[9]

Sepsis is among the most common reasons for admission to ICU’s throughout the world. An epidemiologic study in European ICU’s demonstrated a prevalence of 37% for sepsis and 30% for severe sepsis.[12]

Sepsis is predominantly a disease of the elderly, with the majority of cases of sepsis occurring in patients over the age of 65 years. [13]With the ageing of the population this finding largely explains the increasing incidence of sepsis in Western Nations.  Sepsis is reported to be more common in men and among nonwhite persons.[10] Surgical patients account for nearly one third of sepsis cases in the US.

Why is this Important!

Sepsis survivors are at an increased risk death, major adverse cardiovascular events, ischemic stroke, hemorrhagic stroke, myocardial infarction, recurrent sepsis and heart failure compared to population controls. [19,20] In addition, sepsis survivors incur long-term consequences, including developing new physical, psychiatric, and cognitive deficits. These deficits often limit their mobility and ability to perform day-to-day activities and impair quality of life.[20,21]Yende et al demonstrated that among patients who lived independently prior to severe sepsis, at six months’ post hospital discharge one third had died and of those who survived, a further one third had not returned to independent living.[22] 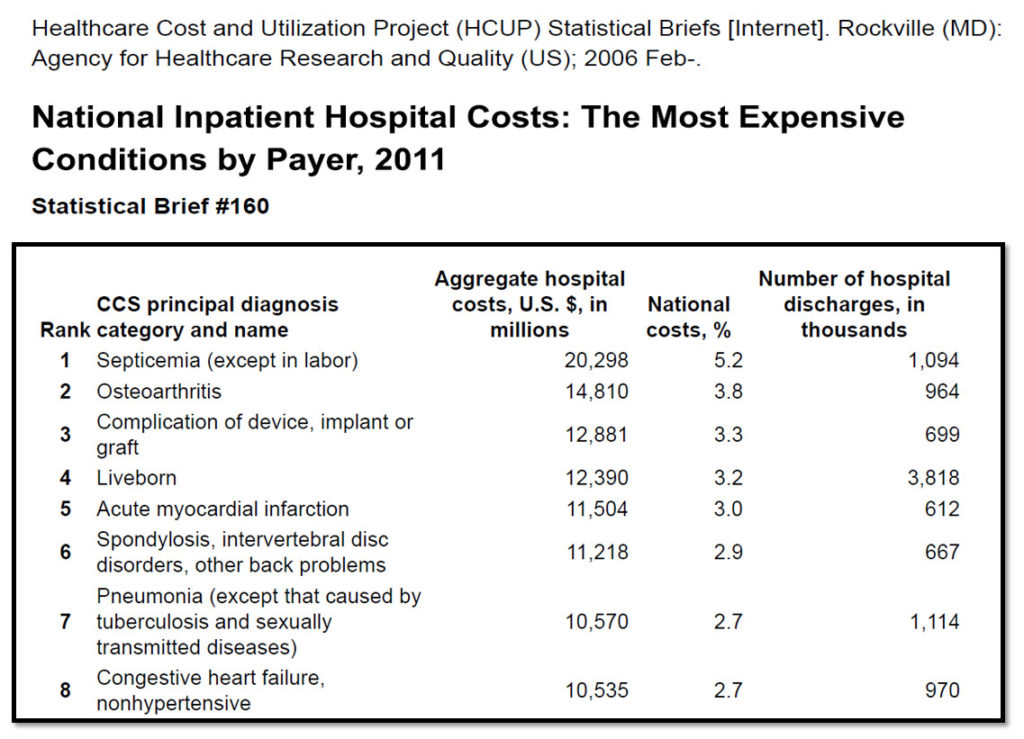